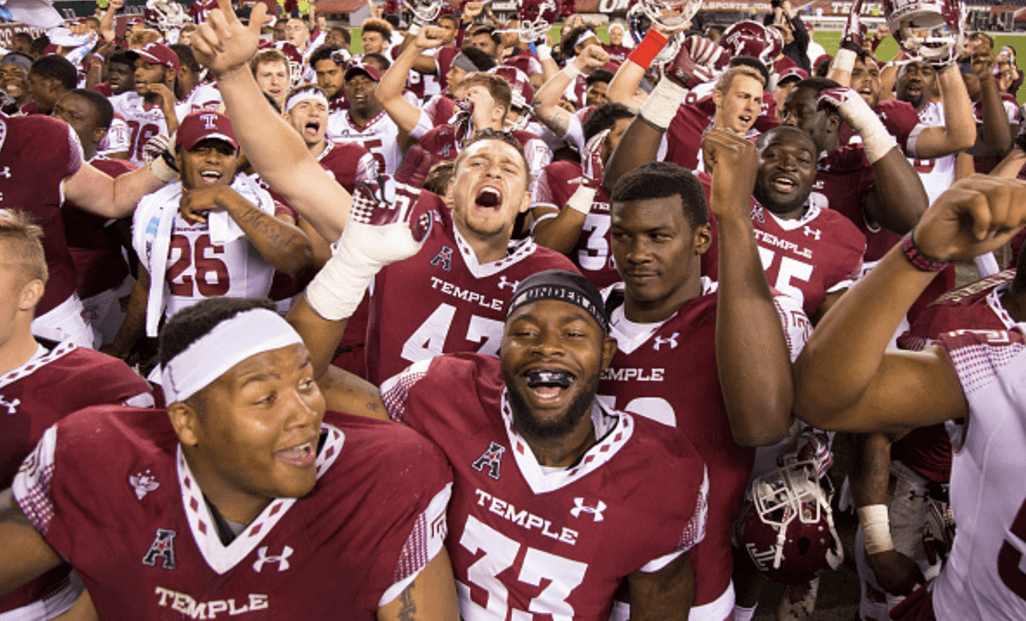 But until a few weeks ago, no one outside Temple’s locker room knew who Aaron Boumerhi was.

They do now, as the freshman from Phillispburg, Pennsylvania — not far from where Owls’ coach Matt Rhule grew up in State College — has stepped, literally, into the breach left by a season-ending injury to kicker Austin Jones. And he’s been perfect.

It would’ve been easy to overlook him in light of Temple amassing 528 yards on offense — including sophomore Ryquell Armstead’s career-best 210 yards rushing — in Friday’s 46-30 shootout win over explosive South Florida that suddenly puts the Owls’ in the driver’s seat in the AAC East. Tied with USF and Central Florida with one loss apiece, the Owls’ own the tiebreaker over both by virtue of head-to-head wins. Plus, on the surface they would appear to have the much softer remaining schedule.

But Rhule knows how critical it is to count on those three points when the offense bogs down in scoring territory. When Jones, who’d nailed a school record 19 straight field goals over the last two seasons, tore up his knee covering a kick off two weeks go in a 34-27 loss at Memphis, suddenly Boom Boom had to take over.

If he felt any pressure you’d never know, nailing field goals of 22, 35 and 42 yards and five extra points to help hand 6-2 USF its first conference loss.

“Even though you never want it to happen, you have to be prepared,” said the 6-foot, 195 poundBoumerhi, now five-for-five for the season. “It sucks because Austin’s a great guy.But kicking’s all mental, so you never want to do anything different. Try and keep everything the same, because when you start thinking about it becomes a mental thing. When you start to think about outside factors is when you start messing up.”

“I don’t think about the score, distance or hash mark,” explained Boumerhi, who comes from a family of kickers, including his brother, Nick, at Penn State. “I start thinking about each kick like an extra point.Talking to other kickers, talking to my brothers, they tell you not to worry about that stuff. If you think it’s an extra point, not a 55-yard field goal, you won’t be jittery.It’s just you and the ball. Be smooth, relaxed and kick the ball.”

As simple as he makes it sound his coach and teammates appreciate the way Boumerhi has answered the call.

“He’s unbelievable,” said Rhule, whose 5-3 (3-1) team hosts 4-3 (1-3) Cincinnati on Saturday, followed by trips to UConn and Tulane, then East Carolina back home. “He literally just acts like it’s not a big deal and goes out and kicks it.We had one of the best kickers in the league with Austin. To replace him with a freshman walk on from two towns over from where I am from is crazy.”

Rather than being devastated by losing a key player, Boumerhi’s emergence has kept the Owls alive and kicking.

“We have good depth, so anytime someone goes down we have another guy,” said offensive tackle Dion Dawkins. “But Boom Boom definitely doing a great job.I’m happy for him.”

“In practice we could see he had the leg,” added receiver Ventell Bryant, who caught five Philip Walker passes for 115 yards versus the Bulls. “The way he’s come out gives our whole offense confidence. We believe in him.”

Meanwhile, after pulling out an improbable last second 26-25 win over UCF last week—going 70 yards in 30 seconds without a timeout—a lot of folks are believing they have a real shot to the defend their AAC East title. Of course, Rhule doesn’t want to look that far ahead.

“This was a huge win for us, but I told them ‘Whatever you did tonight won’t matter if you lose next week,’” said Rhule. “Obviously it gives us some leeway but that can all change in the blink of an eye, so they better stay focused.”

Their new kicker already is, as Aaron Boumerhi has picked up right where Austin Jones left off. Thanks in part to “Boom Boom,” Temple suddenly has a leg up on the rest of the field.