By Molly Given
comments
Posted on November 10, 2021 If there was ever a format to showcase the power of storytelling, it’s with First Person Arts. Founded in 2001 by Vicki Solot, this creative organization was firstly meant to be called Blue Sky as a response to the burgeoning interest in memoir and documentary art forms. However, after 9/11 Solot responded to the tragedy by coming up with The First Person Arts Festival of Memoir and Documentary Art, and in 2006 Blue Sky became First Person Arts and have since showcased the work of hundreds of artists nationwide. Since then, it has also become Philadelphia’s premier nonprofit storytelling organization.

Since its inception, FPA has put on numerous events including what they are perhaps more famous for, their Story Slams. These specific nights usually have a theme and when members of the community come in, they’re asked if they have a true personal story around 5 minutes or less to go along with the theme. People either do, or they go there to listen. Since the slams started over a decade ago in 2007, First Person Arts has hosted 250 slams with approximately 11 new stories every time—that comes out to be 3,3500 stories just from community members over the years. Their signature is the ‘Ex Files’ Slam which takes place every Valentine’s Day and invites people to tell stories about their romantic pasts.

It’s through these slams that Executive Director Jamie Brunson also first learned about the organization. Brunson acts as the artistic director and producer of all of the programming of their story slams, film work and videos. She also handles all the fundraising and the operations of the business on top of being on their board. During her time with FPA, Brunson also created Applied Storytelling in 2012, which ultimately are customized activities for a community in specific neighborhoods. Right now, with Activated Stories, the organization is working with Women’s Way. These certain activations are a way for people to get to know each other or to help show them in another way.

The festival, which is in its 20th year, brings all those things together.

“That’s where we ask people to step out of their comfort zone. Here’s a story from someone you may not know or may have traveled a different route than you,” explains Brunson. “All of our storytelling is intended to foster appreciation among people for our unique and shared experiences.”

Throughout those story slams, there is always a winner chosen by judges and those winners then go and compete in a grand slam. This standout event from the festival will take place Nov. 13 at 8 p.m. at World Cafe Live, and the theme is Caught Red Handed.

“Definitely a must-see…It always sells out, but that’s something you want to get a ticket for,” Brunson continues.

Some other standouts from the festival, which is running now through Nov. 20, spans over three live events and an array of other virtual ones. On top of the grand slam, two happening in person will take place at Plays and Players. One will be with local comedian Betty Smithsonian who is going to do a show called “Spill It,” which will feature some of her comedian friends telling true and personal stories with different backgrounds. “Spill the Chai,” on the other hand, is with comedian Alyssa Al-Dhookhi and will feature south-east Asian and Asian storytellers and comedians.

“We’re featuring a lot of stories that are going to be spaces for us to get to know each other and to find common ground. Especially during the pandemic,” explains Brunson.

Another standout that Brunson mentions is a virtual event with the Curtis Institute of Music. In this event, they are working with their musicians to help them incorporate storytelling into performance. This particular event will happen Nov. 13 at 11 a.m.

For people that want to learn how to share their stories, they will also have lunchtime and evening workshops, one titled ‘Finding the Funny,’ which Al-Dhookhi will also be teaching. Other workshops include storytelling in the workplace for business skills and empowerment, and then an opportunity to workshop those stories.

“The number one thing that we strive for is that embracing and welcoming environment. We hug with masks, we [bump] elbows and we welcome people in. [Participants] are going to find themselves in a group alongside other people who have somehow made it through this pandemic this far. And not without our scars,” Brunson says. “We’ll get to laugh together, or sometimes there are stories that make you want to cry. But they’re all transformative, they’re all compelling and they’re all powerful—so, you’re really going to be in a space to connect around our humanity and to meet with other folks that may have experienced the same things that you have.”

More information on the First Person Arts Festival can be found online (firstpersonarts.org), but people can link up with the organization through their podcasts (one which comes out twice monthly and another that comes out four times a year) or through any of their various activations that happen annually. Whether it’s producing documentary films (which they have most recently regarding the BLM Movement,) or trying to connect communities through shared experience, the best way to get a taste of FPA yourself is through the festival.

“We don’t perform brain surgery, but the arts help people and continue to help people who are frightened, who don’t know what’s going on or don’t know what the future holds. We know we can make a difference in someone’s life,” finishes Brunson. “We are Philly, we love Philly and we just want the community and the region to know we love them and we’re here. Come out if you can, listen if you can’t, and stay strong.” 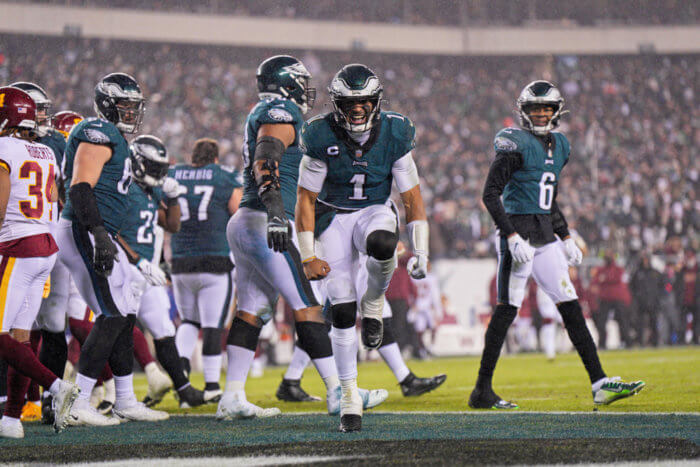 Forecasting a Jalen Hurts contract extension: Is $50M per year a fair price?