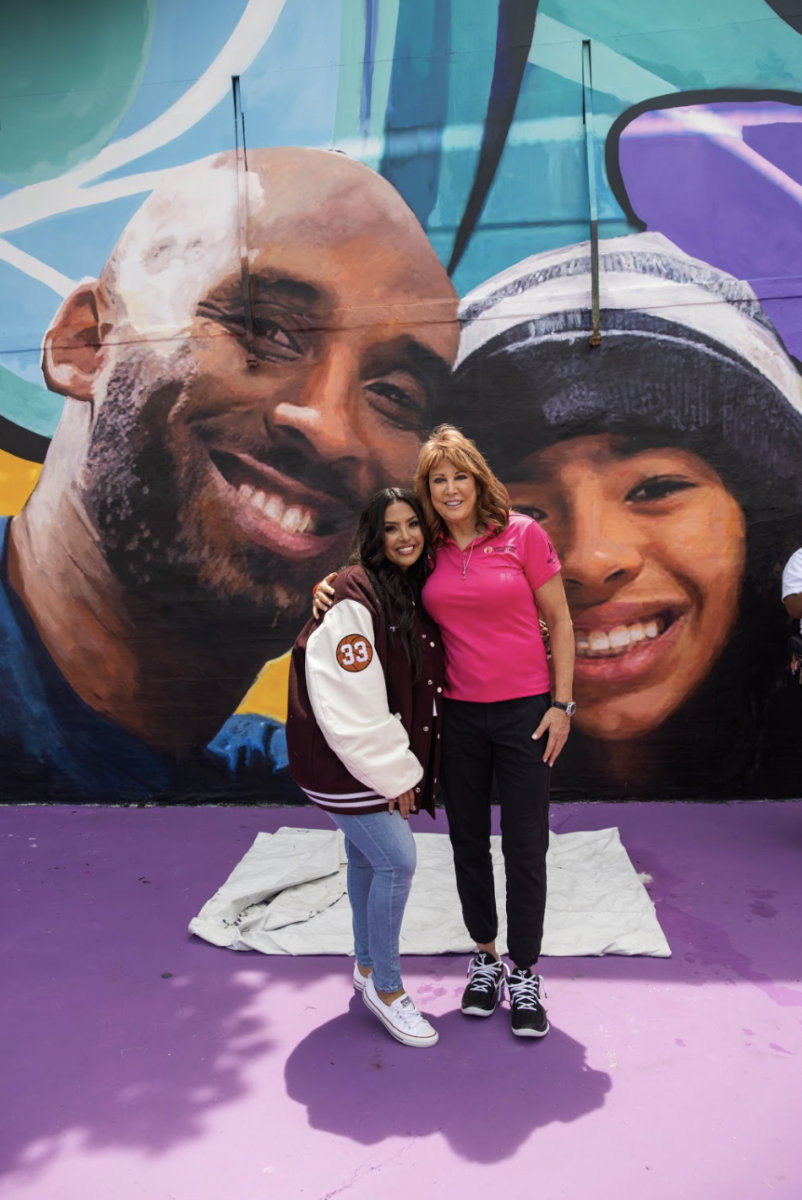 Philadelphia has always been a special place to the late Kobe Bryant.

Before claiming fame with the Los Angeles Lakers and his tragic death in 2020, Bryant was an acclaimed Philadelphia baller who showed his youthful talent at Lower Merion High School in Ardmore.

“My husband was born here, and so was his love for basketball,” wrote Vanessa Bryant, Kobe’s wife, Gianna’s mother, and President of the Mamba and Mambacita Sports Foundation. “My girls and I are so happy to give back to Kobe’s hometown in this special way.”

The “special way” in which Bryant’s widow is giving back comes with Mamba and Mambacita and basketball player-philanthropist Nancy Lieberman Charities’ dedication of two new outdoor basketball “Dream Courts,” and a public arts mural at Philadelphia’s Tustin Playground in honor of Kobe and Gianna.

“I chose Tustin Park so children and young people in this community have a safe space to play,” wrote Bryant. “Kobe and Gianna would be happy to know boys and girls will have equal opportunity to compete, learn, and play through the game they both loved so much.”

Lieberman, a one-time pro basketball player and coach in the Women’s National Basketball Association nicknamed “Lady Magic,” established her own charity with health, physical activity and well-being at its center. The idea of “Dream Courts,” state-of-the-art basketball spaces designed for youth communities, came about as sports saved her life as a child.

“Being able to go on a basketball court when I was a kid, when I had nothing, allowed me to breathe,” said Lieberman. “My childhood was based on anger… I needed a chance to express myself. Sports was that vehicle for me.”

Going further, Lieberman recognized that there are “kids out there now, in pain,” and that, “everyone needs something,” of their own. “That’s cathartic for them. To be accepted is hard, educationally, socially. I learned on the basketball court and not in school. I am a critical thinker because I know inertia, I know teamwork – because of what I learned on the court.”

For Lieberman, Philly was crucial to the game she loves through a person she deeply cared for—Kobe Bryant.

“For me, to be accepted and trusted by Vanessa in the name of her husband and daughter gives me chills,” says Lieberman. “The legacy that the Bryant’s are leaving is amazing.”

The conversation between the two women about the creation of the Philadelphia “Dream Courts” near when Kobe was raised was built on that trust, and the baller-philanthropist’s drive and passion. “There’s no BS about me… Once I won Vanessa’s trust, I wanted to deliver. I wanted to OVER-deliver.”

Over-deliver Liberman did by turning Tustin Park on its heels with fresh hoops and courts topped with high-performance PowerGame surface from Sport Court in purple and gold, and a public art installation and mural, donated by the Mamba and Mambacita Sports Foundation and Mural Arts Philadelphia painter Ernel Martinez.

“This is Vanessa’s family, so everything we did had to be the best, and authentically her,” says Lieberman. “The highly, highly detailed brilliance of Kobe and Vanessa had to be a part of this Dream Court.”

Lieberman told Metro that her “Dream Court” in Philly was built of out selfishness, too, to honor “Kobe, who I honestly and deeply respected, and was so good to me. I was supposed to go out there and coach GiGi’s team, the day that he and his daughter passed. He reached out to me on the Saturday and on Sunday we lost him. We lost them both, lost everybody else on that helicopter. To honor those two, honestly, in the very best way, was to bring something to their legacy that would last forever – long after I’m not around – where people could play the game of basketball GiGi’s way. To play it Kobe’s way.”