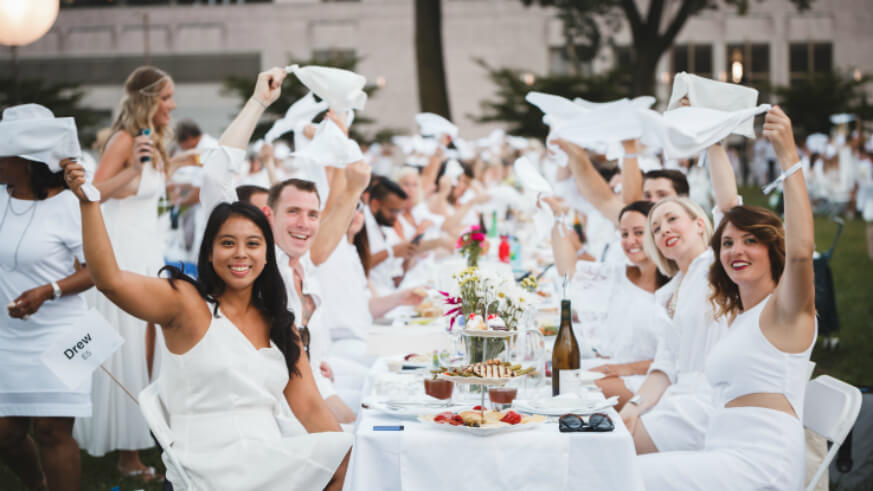 In years past, you may have happened upon a sea of Philadelphians in white attire camping out in different parts of the city with food, fun and twinkling lights acting as a backdrop. Some might think this instance is a one-off party, but others know this annual event as Le Diner en Blanc Philadelphia.

In previous installments, the popular Parisian-inspired pop-up picnic has called a few different popular areas of the city home, such as on the Art Museum, Franklin Park, Logan Fountain and even in the picturesque Rittenhouse Park last year. 2022 holds a different locale for the event, however. On top of having a dinner in Philadelphia this summer, the pop-up picnic will also move outside of city limits and make its way down to the beach for the very first time.

Le Diner en Blanc’s new home has recently been announced as Atlantic City—aka, home of the world’s first Boardwalk, Miss America Pageant and of course, salt-water taffy. Although plenty of Philadelphians head down to the sea-side escape during the summer season, many have still not been able to make it down to the town, which famously inspired the Monopoly board.

“Today is truly a great day here in the city of Atlantic City, as we let the world know Diner En Blanc is coming to Atlantic City,” Small said in a statement. “I’ve been working for years to bring this event to our great city and I couldn’t be happier that it’s now a reality.”

What makes Atlantic City the perfect destination for the pop-up picnic? As a release states, over the years, Le Diner en Blanc has become one of the most sought-after culinary events around the world. Thousands of guests are brought together from diverse backgrounds with a common interest in elegant dining at an unexpected public space. Atlantic City, just 60 miles from Philadelphia, has seen a metamorphosis in its culinary scene- attracting world-renowned chefs and nationally recognized restaurants.

The event is being brought to Atlantic City by the organizers of Le Diner en Blanc Philadelphia, which will  be celebrating its 10th anniversary this summer.

How can you reserve a seat?

To participate in this first edition, guests must be invited via the hosts’ network or participating partners or get on the waiting list via the official website, according to the release. To be part of this event, people can sign up now at atlanticcity.dinerenblanc.com and click on the register tab. It was announced at the press conference that the first 500 guests to sign-up on the waitlist will receive a Phase One invitation. Registration during this phase will be guaranteed for those individuals.