Molly Given
comments
Posted on December 30, 2019 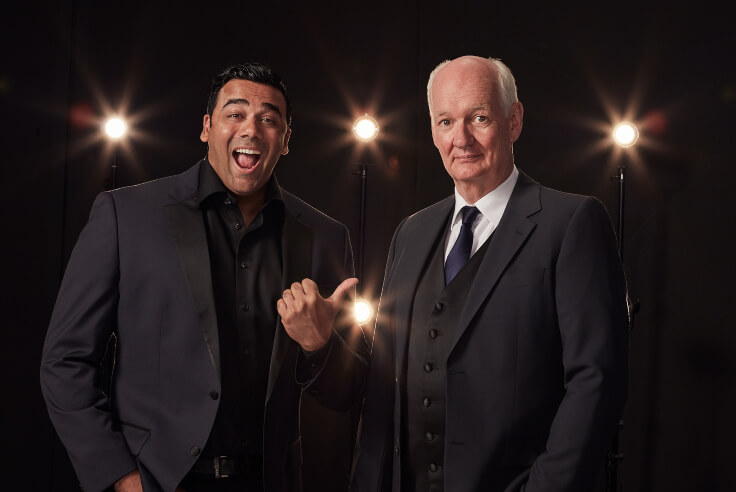 Some things just go together: peanut butter and jelly, mornings and coffee, and now … hypnosis and improv comedy. The beautiful marriage of these two curious art forms is the exact focal point of Asad Mecci and Colin Mochrie’s new traveling stage show, “Hyprov.”

Mecci, who is a master hypnotist, dazzles audiences by bringing volunteers on stage, hypnotizing them and then “Whose Line Is It Anyway” alum and world-renowned comedian Colin Mochrie ignites a hilarious improv show with the hypnotized participants. Sounds crazy? Yeah, it did to both Mochrie and Mecci too, until they tried the show —- and results have been more than fascinating. Both Mecci and Mochrie sat down with Metro to discuss the inspiration behind their show and the challenges behind it all.

Where did the idea for this show come about?

CM: It was Asad’s idea actually, he was taking improv classes in Toronto and through the class, he realized that the structure for teaching was sort of the process of what hypnotism involves. In improv, you’re basically trying to push down the part of your brain that is there for self-criticism and self-reflection and just go with the creative part, and when you’re being hypnotized that’s what happens. That part of your brain diminishes, and the creative part increases. So we thought it might be interesting to combine the two arts. We contacted my agent, we had a meeting and I thought yeah this sounds terrifying — let’s do it.

AM: I was doing a comedy hypnosis show on my own at the time actually, it was a one-man act. I wanted to get better on stage as a performer, so I went to the Second City Training Centre in Toronto to check out their improv classes, and it was there that I realized what they were actually doing — they were trying to get unconscious functioning from their students. The instructors would often say, ‘Get out of your head. You’re trying too hard to be funny.’ With great improvisers, it’s all automatic, and it’s all a knee-jerk reaction — and that’s where the genesis of “Hyprov” came from. With hypnosis, you’re leaving the conscious mind aside and you’re working directly with the unconscious mind. First-time improvisers will hesitate and play to the audience to try and get laughs, they are probably a bit unsure of themselves, whereas people who are hypnotized take on suggestions without any hesitation or thought. So I thought can I take someone, hypnotize them and in turn make them into a really great improviser? The results so far have been outstanding.

How do you choose who goes up on stage?

AM: I bring up 20 volunteers, I hypnotize them and whittle it down to the best five hypnotic subjects. When they came up on stage, I’m looking for changes in respiration, skin tone changes or maybe their eyes will start to tear up because when you go under you really start to relax. If I see those indicators I’ll keep them up on stage, if not, I’ll send them back.

Did you practice this at all before taking the show on tour?

CM: No and that was the terrifying thing, the first time we did the show was the first time we did the show in front of an audience. I was not 100 percent sure of what I could do. I asked Asad, “If I ask them to do this, will they do it?” He would say he didn’t know— some of them might, and some of them might not. So that added that extra level of fear.

What are some of the challenges with a show like this?

CM: When I’m working with other improvisers, even ones I don’t know well, I still know that we have the same set of rules. You immediately trust the people you’re with because you have too. So I have to get that instant trust with these people who I’ve just met and who are in a hypnotic state. With other improvisers, they will form their own ideas — that doesn’t happen as much with the subjects in our show. I sort of lead them along and then they can certainly take that somewhere and that will give me something to work with, but they’re not so much instigating ideas.

On the other hand, what do you like about this new type of show experience?

CM: What I love about it is that it really keeps me on my toes. There’s no point in this show where I can just relax and go, okay this is going to work out. It’s nothing like that. It’s actually made me a better improviser because it’s sort of taken me back to the beginning of my training. I really have to listen to these people, I really have to support what they’re doing and take whatever tidbits they give me— I think it’s sharpened me up a bit, which has been great. Also just having the chance to work with people that I’ve never worked with before. When I talk to them afterward, I always ask if they remember anything, and they all always say that they do remember everything, and everything I said during the show just sounded like a really good idea. It’s so bizarre to me. We even had a woman come up who said she has almost-crippling social anxiety, and she had no idea why she came up, but when she did she has never felt more confident. It’s really kind of cool.

AM: I get a front seat to the best comedy in the world— Colin is a savant when it comes to comedy. He is like nobody else on the planet, he is just among the top comedians in the world when it comes to improv. So to be able to watch him with these people who he’s never met before who are under hypnosis, it’s fascinating and hilarious.

What do you think this combination of hypnosis and comedy brings for the audience’s experience overall?

AM: Audiences are just in tears from the laughter, they are so engrossed in the show. It’s fascinating for everyone, but it’s the best when they know the person on stage. I can always identify the people in the audience who know a guest on stage because they are the ones who are doubled over and literally on the floor laughing.

CM: What’s weird about hypnosis and improv is that a lot of people don’t believe in either one of them, or they think the people who come up on stage are just plants— same thing to a lesser degree with improv, they may think it’s scripted. So I hope that people have a greater appreciation for both of the art forms once they see it. I didn’t have a strong feeling for hypnosis before this one way or the other, but it has been so fascinating to watch. Every night I’m offstage while Asad is hypnotizing people, and I find it just fascinating to watch. I might think oh ok, that person is faking, or that person is totally under, or that person wants to go under but is too tense— so it’s really been interesting seeing the science behind it all.