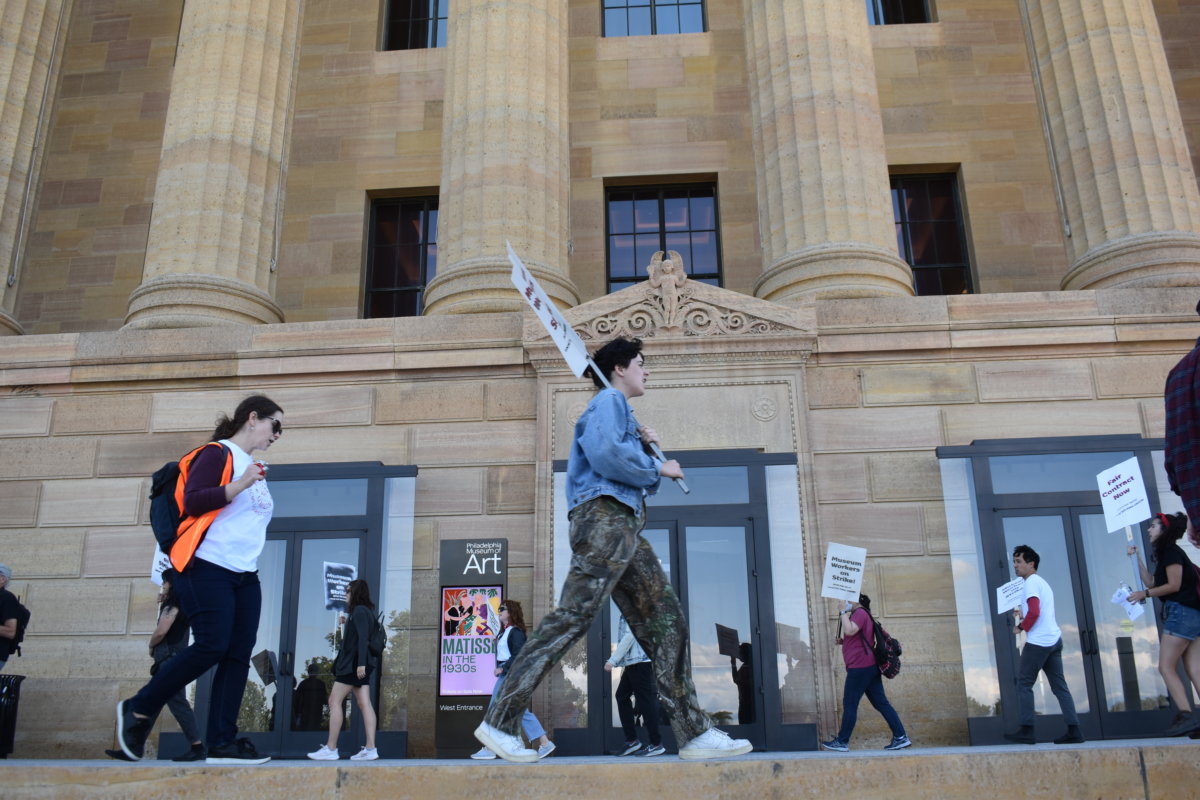 Staff at the Philadelphia Museum of Art are entering their third week of picketing on the Benjamin Franklin Parkway, with little-to-no progress in recent days on an agreement that would end the strike, union officials said.

Local 397, part of AFSCME District Council 47, is seeking its first contract with the museum, a process that began when employees voted to unionize in 2020.

PMA management, citing the advice of a federal mediator, declined to meet with union leaders Sept. 30, and Local 397 President Adam Rizzo said administrators have not responded to a union contract proposal submitted more than a week ago.

Rizzo said Local 397 is not willing to lower their demands without a counteroffer from management. Some time ago, a negotiation session was scheduled for late next week, he said, though the status of that meeting is unclear.

“What we continue to maintain is that we are willing to meet with management whenever they want to,” Rizzo told Metro on Monday. “We’re available. We’ve communicated that clearly to them.”

The PMA’s communications department did not respond Monday to requests for comment about the negotiations. The museum has remained open, with supervisors filling in for striking workers.

Mayor Jim Kenney’s administration is “facilitating discussions and meetings between the two parties so that both sides can reach an agreement that will benefit both workers and the museum as a whole,” said Kevin Lessard, a spokesman for the Mayor’s Office.

Kenney has asked his longtime associate, Deputy Mayor Rich Lazer, to lead the city’s efforts to resolve the strike.

“I do think that they could put on more pressure,” said Rizzo, who noted that the city owns the PMA property, which it rents to the nonprofit operator of the museum for a nominal fee.

City Hall also pays PMA’s utility bills – which cost $3.4 million in the 2021 fiscal year, according to the nonprofit’s financial statement – and contributes just over $2 million a year to the museum.

An image that surfaced on social media in recent days shows what Local 387 members believe are non-unionized employees, or “scabs,” preparing for an upcoming exhibition. The photograph has not been verified.

The PMA is preparing for a special exhibit featuring the work of popular French artist Henri Matisse that is scheduled to open to the public Oct. 20.

“It looked like they had hired scabs and that they also had certain museum staff members who, I would speculate, are not usually permitted to handle works of art,” Rizzo said.

He told Metro that he believes the PMA’s behavior during the strike “is scarring the reputation of the museum on an international scale.” NPR and the New York Times, among other outlets, have covered the labor dispute.

On Sunday, PMA posted a statement to its social media pages saying it was disabling comments “due to the volume of inappropriate posts — including profane language.” A recent post on the museum’s Instagram generated more than 430 responses, a large number of which were in support of Local 397.

“We value our entire staff deeply, and we look forward to reaching a fair and appropriate resolution to the collective bargaining process soon and welcoming our colleagues back to work,” the PMA’s Sunday statement said.

The stumbling blocks to a deal continue to be wages and benefits, Rizzo said. Union leaders have argued that PMA executives receive higher pay than counterparts elsewhere, whereas rank-and-file employees receive less than those at other museums.

PMA management has offered an 8.5% pay raise over the next 10 months, with an additional 2.5% increase in July 2024, though union leaders say the proposal does not go far enough to cover the disparities and make up for years without raises.

Museum officials have said they believe the salaries are competitive to other leading art institutions, when adjusted for Philadelphia’s low cost-of-living compared to cities like New York and Los Angeles.

Local 397 also wants the PMA to contribute more to workers’ healthcare costs. A vast majority of staff are on the museum’s high-deductible plan with a 10% coinsurance because they cannot afford the HMO option, according to the union.

The high-deductible plan pays nearly 90% of healthcare costs and the PMA offers $500 annually to individuals and $1,000 to families who are enrolled in a Health Savings Account, a museum spokesperson told Metro last month.

Workers on the picket lines have been receiving payments from Local 397, which has a strike fund, to help cover living expenses, according to union officials.

“We’re prepared to stay out as long as it takes,” Rizzo said.