Phillies circling back for Kris Bryant?

By Joseph Pantorno Posted on February 5, 2020 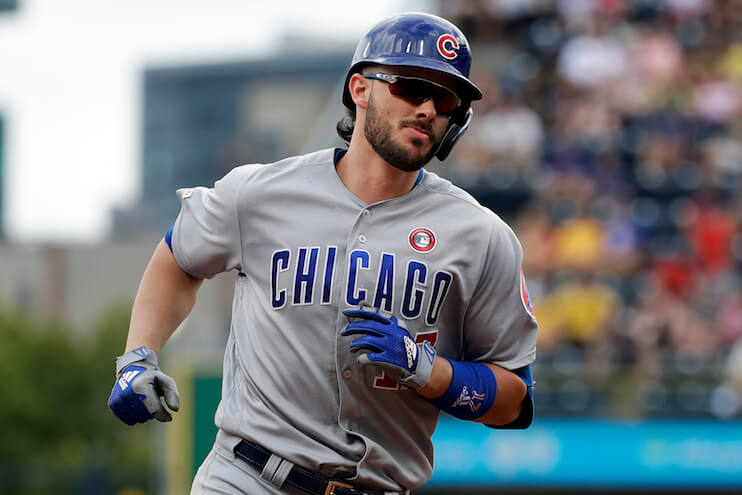 The 28-year-old is back on the trade block after losing his playing-time grievance last week.

Despite playing in 151 games and having 171 days of service time during his rookie season in 2015, existing parameters set by Major League Baseball allowed the Cubs to keep him in the minors for the first two weeks of the season to ensure he wouldn’t be credited with a year of playing time.

Because of that, Bryant will be a free agent in 2021 rather than at the end of the 2020 season, which seemingly has created such a divide between player and organization that the trade market is heating back up just days before pitchers and catchers report.

His availability could be a godsend for general manager Matt Klentak, who would salvage this offseason by making one last big splash.

The early-December signings of pitcher Zack Wheeler and shortstop Didi Gregorius provided a promising start to the winter as the Phillies addressed two key needs.

Since then, however, Klentak and the Phillies have been bystanders regarding baseball’s largest moves as they’ve focused on staying under MLB’s luxury tax threshold rather than improving the roster.

Upon the remaining items of Philadelphia’s list of needs, a legitimate third baseman is probably near the top in bright red ink.

The organization moved on from Maikel Franco and have Scott Kingery penciled in as the Opening Day starter at third.

Kingery had a decent showing in 126 games last season, slashing .258/.315/.474 with 19 home runs and 55 RBI. But he would best serve as a utility option that can play multiple positions, playing behind a talent that can add another punch to the middle of the Phillies’ lineup.

Last year was all the evidence needed that the Phillies need a bit more to beef up their offense. Rhys Hoskins’ struggles in the second half of the season hampered the Phillies on their way to a fourth-place finish in the National League East.

Bryant would not only be the kind of talent the Phillies need, but he would also be reunited with long-time friend Bryce Harper. The two grew up together in Las Vegas and would immediately become a threatening 3-4 punch in the lineup:

The Phillies would have to give up a hefty return to the Cubs if talks were to get that far. The lost grievance adding another year of team control makes Bryant’s value higher for the Cubs, meaning negotiations could be centered around Phillies top prospect and third baseman Alec Bohm.

His inclusion might be the only way to keep Chicago’s interest piqued as the Phillies will have competition within the NL East.

Fresh off losing Anthony Rendon to the Los Angeles Angels, the defending world-champion Washington Nationals are also believed to be in on Bryant, per Nightengale.

Within a National League East division that is slated to be one of the most competitive in baseball given the outlooks of the Nationals, Braves, and Mets, the Phillies can’t let Bryant go to a rival that would further hurt their chances of missing out on the playoffs again.