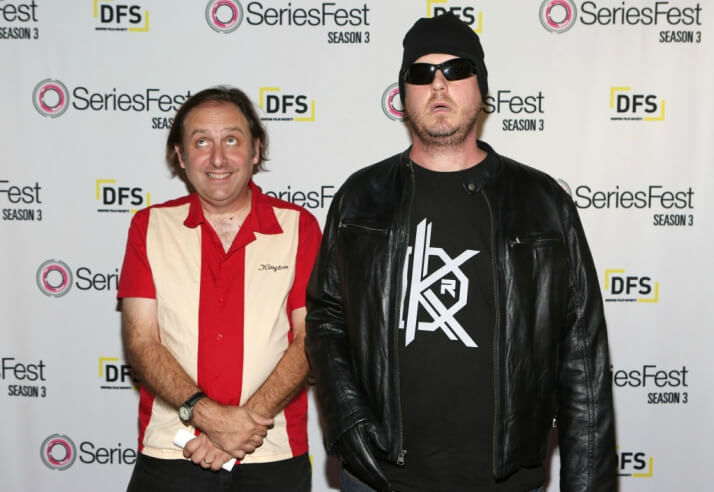 Tim Heidecker is used to making bonds and sticking with them. The Philadelphia-born comic actor and writer has been tied to fellow, Temple University student Eric Wareheim – as Tim & Eric – since 2018 for countless cable shows and stage productions. Gregg Turkington is a more self-reliant sort, as the Australian-born actor and comedian has performed as his greasy, bespectacled insult comic alter ego Neil Hamburger since 1995. Turkington is now in league with Heidecker for their subtlety hilarious, mega-successful Tim Heidecker and Gregg Turkington: On Cinema parody film review podcast and web series. For the first time the podcast/web series is moving onto the stage for Tim Heidecker & Gregg Turkington: On Cinema Live! at The Fillmore Philadelphia on September 26.

Tim Heidecker and Gregg Turkington bring their show to the Fillmore

Both men seem to take their goofball pairing – where each resents the other and they both play awful, exaggerated versions of themselves (named Gregg and Tim) with more deaths and illness than movie reviews – very seriously.

“Movie sets can be a little dull between location settings and such, and Tim and I – who had already been trading horrifically bad podcasts with each other – said let’s start our own podcast,”  claimed Turkington, referring to the set they shared while filming 2012’s The Comedy. The duo began creating elaborate podcasts between takes or in the car after sharing their love of film and their snark regarding film critics. “Parody is a natural resting place for the two of us, and just happened to work when hearing some truly bad podcasts,” said Turkington. “Intuitively though, whether we’re ripping on podcasts and film, we’re just trying to make each other laugh.

Turkington, whose character for On Cinema is a truly snobby cinephile, calls Heidecker, the hardest working man he knows. “Tim’s got endless energy and will try anything,” he said. “I get super-inspired while working with him, especially as we go in so many unexpected directions.”

Heidecker calls Turkington one of the “smartest” artists that he’s ever worked with, and one who was quick to take to the concept of using their own names, while portraying these terrible characters. “I knew that there might be some issue with naming the characters ‘Tim’ and ‘Gregg’ and that, perhaps, we’d be more successful if we just created characters,” said Heidecker.”I do think that it lends to the show’s blurred reality. And you know – if you go through what I’ve done in the past – I almost always use my own name for every character I do.” To makes things even more muddled and confounding, Heidecker’s alt-right character for “On Cinema,” is as Trump-like as the comic actor’s role in “Decker,” the Adult Swim network comedy. “I like blowhards,” he said with a laugh, which is excellent considering that the pair are critiquing critics making criticism.

The funny thing (well, there’s many funny things), about the staging of: “On Cinema: Live!” is that neither Heidecker nor Turkington and their special guests, won’t review many movies. If you follow their podcast/web show, you’ll know that the bullying ‘Tim’ character and ‘Gregg’ currently find themselves part of the action on “Decker,” (a murder at an EDM festival) which makes for an even more complex interaction between storylines.

So, with Heidecker coming back to his hometown, will there be a preponderance of Philly-filmed flicks– such as Mannequin 2, or The Sixth Sense, or The Silver Linings Playbook thrown under the bus?

“I can’t tell you what films we’re tackling, but I can say in other cities, we’ve found hometown films to rip on,” said Heidecker. And Turkington – who has played in Philly many times as his “Neil Hamburger” character, said he loves coming to town and finding great eats. “When I used to play Khyber Pass in Old City, I used to love eating at Mexican restaurants there. That will be the first thing I look for when we get in.”