Riviera: a catwalk of glamour, crime and international designers 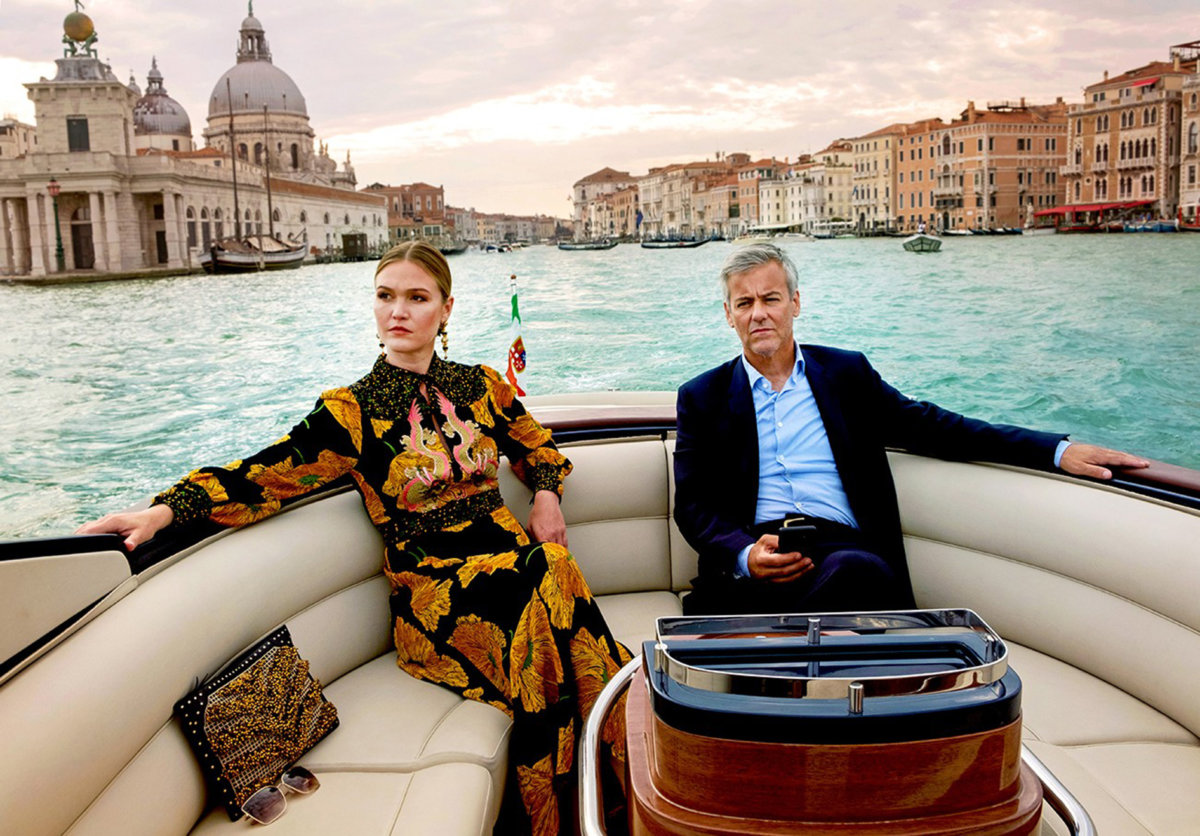 Rebecca Hale used vintage pieces and suits with perfect fittings to add personality and elegance to the characters.
SKY

Exquisite looks, perfect crimes, conflicting family relationships, manipulation and business, as well as not-so-holy lives… That’s Riviera, the glamorous Fox Premium series created by Neil Jordan, in which Georgina Clios, played by Julia Stiles, has to deal with her new family’s management, her past and her own actions. This season, Georgina no longer uses her husband’s last name but has reinvented herself as Georgina Ryland, a famous art restorer, associated with Gabriel Hirsch (Rupert Graves). Georgina, now stronger and in control of her own destiny, will have to return to St. Tropez, but she will also tour Venice and Argentina to face the conflicts that arise in a season that delights viewers with dresses from brands such as Gucci, Roland Mouret, Elie Saab, Giles Deacon and Tom Ford, among others.

Rebecca Hale was the one who recreated the atmosphere of this season. She had to think about what featured cities evoked. This gave her the inspiration to create the costumes with many vintage pieces, but which had to be in line with what the place conveyed.

“I thought that each country would benefit from a different color palette. Venice is architecturally and historically unique, with beautiful terracotta buildings and its golden light. On the other hand, with St. Tropez, I always remember Brigitte Bardot, with that French boho chic with a much harsher light. Now, the Riviera style has a definite look. The French are always very chic and minimalist when they dress up.

“Then you have the influx of Russians, Brits and Italians. The Italians are really elegant, the British usually look great and there you have the archetypal man with his red pants and his Panama hat. The Russians, on the other hand, are Versace style exuberance. Now, the Venetian style is generally quite classic: they like strong colors, but their mood is quite conservative, yet their taste is impeccable. The men are peacocks: I loved all the water cab drivers with their white shorts and light blue polo shirts. When I saw that and other details, I thought that in Venice nothing can go wrong,” Hale said.

A stronger and more sophisticated protagonist

Georgina is slowly assuming her adventurous and powerful identity through incredible dresses. Far from the palette of other seasons, she uses stronger colors and is riskier in her styles:

“Georgina is now an empowered woman who had freed herself from the shackles of her previous marriage. A new generation of women is emerging in the world. Women are evolving into a new era where they can walk into a room and feel independent, look good, not be afraid of their sexuality, be single, go on vacation alone, eat in a restaurant on their own. They are simply themselves. So she now enjoys her individuality and her character represents this.

“She is a new kind of heroine and always advocates equality and what is right. So she’s not afraid to walk into a room and look sexy, but also independent, which is very important. So I wanted her to look a little stronger and more graphic. My favorite was the opening dress she wore when she arrived in Venice, made by Gucci. It reminded me of the baroque style. It worked beautifully because it transcended from night to day. It was a very powerful piece,” Hale added.

There is a fashion icon of her own in the series: Poppy Delevingne, who plays Daphne Al-Qadar, a British socialite. Hale wanted to change her style and move away from the clichés of boho chic.

“She’s the kind of woman who travels between London and France, so I wanted to mix something British with international fashion. We discovered the incredible Colombian designer Silvia Tcherassi, who makes extraordinary clothes and uses acid colors. One of the first outfits we wore was hers and another one of Ashish. I also bought vintage Ralph Lauren from the 90s, and a fabulous kaftan by Tom Ford, which we put on with vintage heels and nothing underneath,” she explained, thus emphasizing the innate sophistication of the actress.

While many male characters wear costumes, there are varied creators that Hale used to differentiate them. For that purpose, she used pieces by Loro Piana, Ralph Lauren and Cifonelli, as well as Gucci, Diesel and Endless Joy, among others.

“I don’t feel tied down to the idea that you have to use a piece because it’s popular. Stella McCartney defended the concept of spending more on a beautiful piece that lasts instead of buying a lot of clothes that you only wear a couple of times. There’s nothing wrong with wearing something that’s two or ten years old if it is what suits you best. If it still makes you feel good and you like it, why not?” the designer referred to the vintage clothing she has used in the series for Poppy Delevingne, as well as Gucci dress that Julia Stiles wears in the first episode.