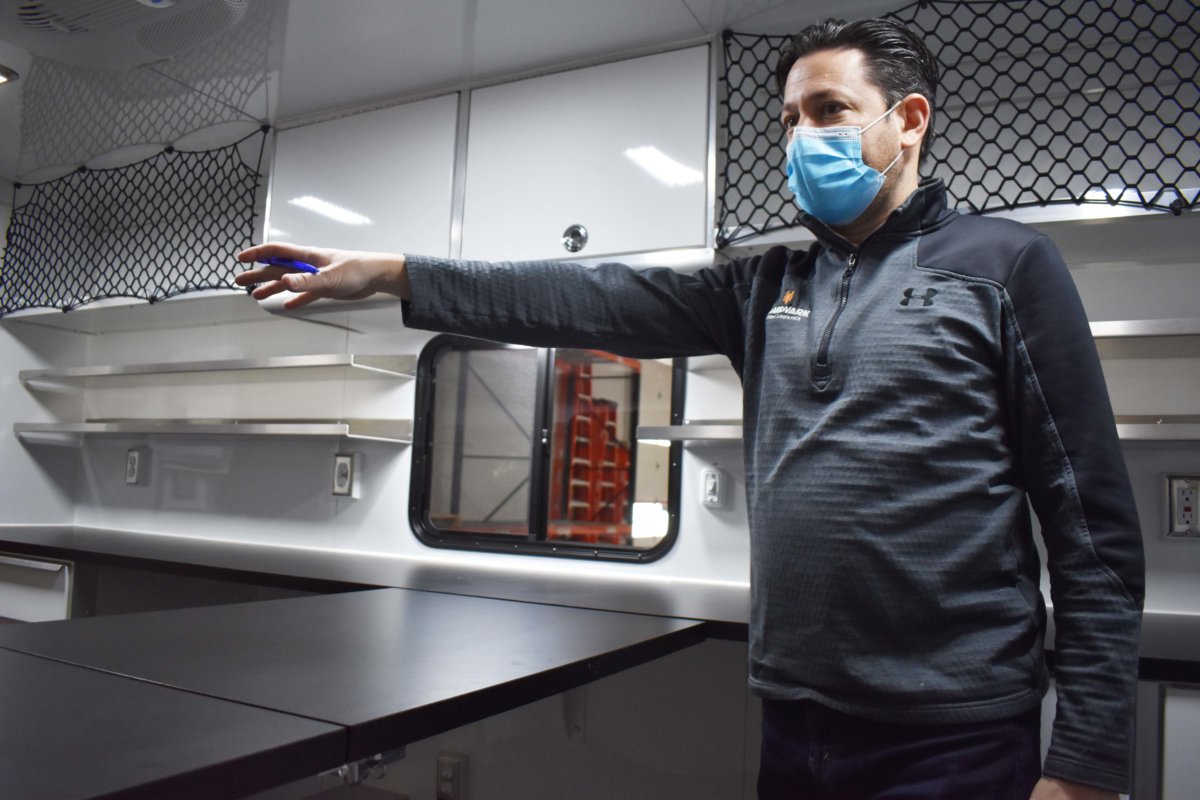 Aardvark founder and CEO Larry Borden gives a tour of one of his company’s trucks Thursday, Jan. 7, at the firm’s Conshohocken headquarters.
Jack Tomczuk

Larry Borden believes he can revolutionize how coronavirus tests and vaccines are distributed in the United States and beyond.

The founder and CEO of Conshohocken-based Aardvark Mobile Tours has been building and operating a fleet of COVID-19 testing trucks, striking deals with cities and counties as well as wealthy families hosting weddings and high-profile musicians who want to get back into the studio.

“I’m the Uber of the taxi business and the Tesla of the automobile industry,” Borden, 46, told Metro.

“Everybody’s been doing it an old way with old ideas and old equipment,” he added. “And boom, here I come with this mobile medical vehicle that is purpose-driven.”

It almost didn’t happen. Borden said he was close to selling or shutting down Aardvark, only two years after moving to a gleaming warehouse in an industrial park just off two major interstates.

The company’s headquarters has the feel of a tech start-up, with pinball machines, a batting cage, chic furniture and exposed brick.

Before the pandemic, the firm, which has 35 full-time employees and about 200 independent contractors, mainly produced specialized vehicles for experiential marketing. They worked with big brands like T-Mobile and Starbucks, showing up at trade shows, festivals and other events.

The business relied on people crowding together in a relatively small vehicle, a non-starter once COVID-19 came around.

“The pandemic hit, and I was like, ‘I don’t even know what we’re going to do anymore,’” Borden said. “All of our stuff was shut down.”

He read an article about shipping containers being used as mobile testing sites and realized that his vehicles could do the job more efficiently.

Aardvark had to alter its design, a process Borden said was informed by discussions with health experts, but it didn’t have to completely overhaul it.

Borden said the trucks can be set up in 15 minutes, and, unlike shipping containers, they have wheels, so they don’t have to be hauled from one place to the next.

Aardvark doesn’t directly assist with testing, but they do offer a service package, which comes with a driver, fuel, maintenance and insurance. That’s handy, especially for local governments that just want to focus on the public health aspects, Borden said.

“We can’t build them fast enough,” he added.

More than 100 Aardvark testing vehicles have been deployed around the nation since July, including in Philadelphia, where the city’s Department of Public Health began using one last month.

Health Commissioner Thomas Farley, during a Dec. 21 press conference unveiling the truck, pitched the vehicle as a key tool in fighting the pandemic, saying it would be able to respond to individual buildings or areas experiencing outbreaks.

About 450 people have been tested through the city’s truck, and DPH spokesperson Matt Rankin said the department “is still working on adding new testing locations to the rotation to get as many people tested in impacted communities.”

Different window inserts allow the trucks to be turned into vaccination clinics, Borden said. When the coronavirus subsides, it can be modified for other health uses, such as providing mobile blood pressure screenings or eye exams.

Aardvark is also working on a four-cabin model, and it has developed a small, nondescript trailer for rapid testing.

The latter has drawn interest from elite clients, who want to be able to screen everyone attending their wedding or other get-togethers. Political leaders, Borden said, have also booked the unit in order to have in-person meetings.

He wouldn’t say how much the service costs, though it’s clearly not cheap.

Aardvark continues to revise the design of its trucks, mainly based on feedback from drivers and healthcare workers, and the company is also preparing for post-pandemic life by crafting vehicles with large LED screens and sound systems.

Borden, who mostly grew up in Baltimore but has roots in the Philadelphia area, said he doesn’t plan to ditch the health-clinic-on-wheels idea, even after large-scale events return.

Sales are still down compared to pre-pandemic projections; however, “it could have been a lot worse,” he said, “and the future looks bright.”

The big lesson from the pandemic, Borden believes, is that companies with the means to do so should build up a substantial “rainy day fund” when times are good.

“Had we not had that cash savings, we would never have gotten this far,” he said.