Report: The top 10 most dangerous Philly intersections for pedestrians 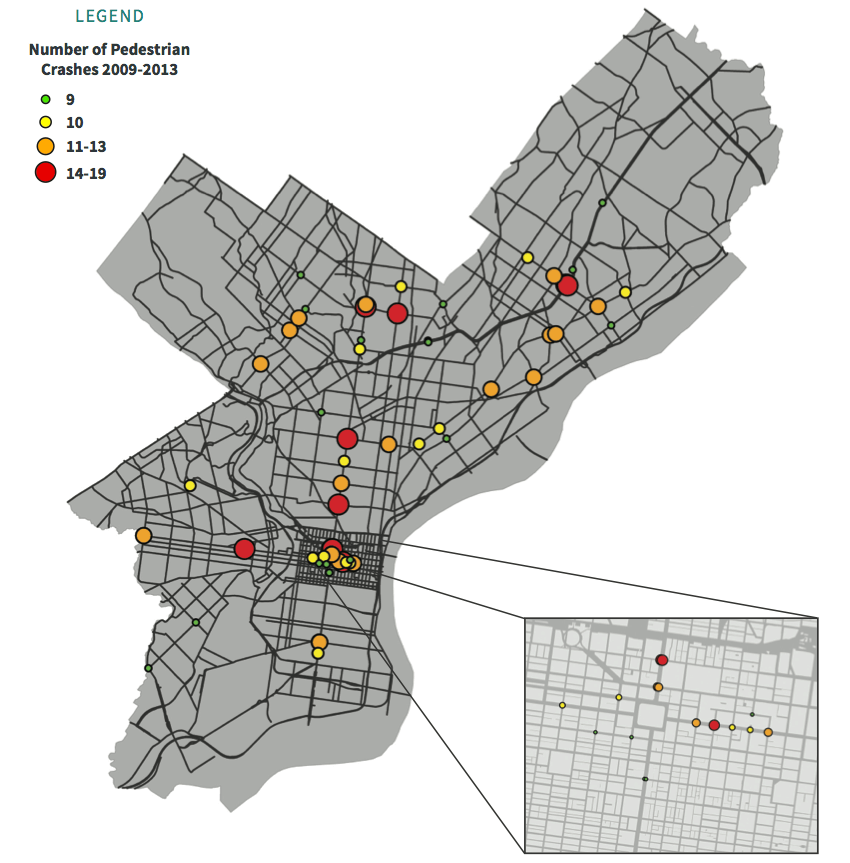 A new report details the most dangerous intersections in Philly, and the Bicycle Coalition of Greater Philadelphia (BCGP) hopes the findings will spur serious changes to the city’s streets.

Thereport was releasedto boost “Vision Zero,” an ambitious plan currently being spearheaded by the BCGP. Together with political and communityleaders, including Councilwoman Cindy Bass, BCGP hopes to make policy changes to bring Philadelphia’s traffic fatalities and serious injuries down to — you got it — zero.

Each year in Philadelphia,says the BCGP, about 100 people die in traffic-related accidents. According to the Mayor’s Office of Transportation and Utilities, about every five hours, a pedestrian is hit by a car in Philadelphia.

Several cities nationwide have adopted proposals like Vision Zero, including New York, Boston and Chicago. Still, even the BCGP admits the plan’s ambitious goal does sound “radical.” Yet, since other cities have already enacted such policies, the BCGP says Vision Zero is certainly doable. The question is whether or not Philadelphians arewilling to change.

Of course, components of that ambitious plan include changing streetscapes to make them more pedestrian and bicyclist-friendly. In other words, the plan has built-in opposition, despite the fact that the plan would, ideally, eliminate all those traffic deaths.

To get an accurate picture of the problem addressed by Vision Zero, BCGP culled data from the federal government’sNational Highway Traffic Safety Administrationand otheragencies, putting the data in one coherent report. Part of that report includes a listing of themost dangerous intersections in Phillybased upon accident data from 2009 to 2013, including:

Another intersection of note included where Cobbs Creek, Market Street and 63rd Street intersect in West Philly,which had 13 crashes over the same period of time.

Based upon the listing, it’s clear that Broad Street is living up to its notorious reputation, as is Roosevelt Boulevard. It’s also clear that areas in West and North Philadelphia, both neighborhoods with large commercial corridors on main thoroughfares, are suffering under what safety advocates consider outdated streetscapes in Philly.